Join us on the Island….a treasured island. 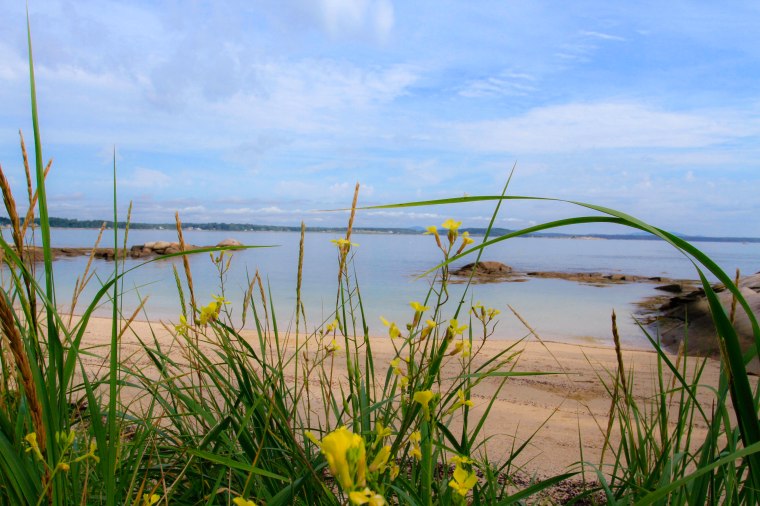 It’s not everyday one is invited to spend a day and night on a private island.  When the Chef and I were presented with the opportunity (over a year ago we were asked, but just now had the time), we couldn’t possibly say no!  Especially since we’ll be leaving this hidden gem of state within two weeks time.  It’s all about experiencing every possible facet of life here before it all becomes a happy memory.

The week started out with island hopping with my new Mainer friend Callyn and her bestie Jackie.  Jackie’s family owns an island too–Pleasant Island I believe is the name.  It was truly an unforgettable day, as we three girls became temporarily marooned by the swiftly receding tide on the island of Two Bush.  The lone 1897 lighthouse is remarkable and yet eerie at the same time.  Literally there are no trees, no bushes (the only 2 bushes are long gone, probably left during a Nor’easter) just the lighthouse, jagged rocks, ground cover and birds–lots and lots of birds.  The island has an interesting history, which could be an all together separate blog post.

After our unbelievable feat of removing an all metal boat from the rocks of Two Bush (there was no way we would call our Coasties to rescue us–how embarrassing that would have been–maybe a lobsterman, but no Coast Guard)….we then crashed the sunbathing party of a family of seals.  Now that was exciting and somewhat weird too.  Once in the water these cute dog-looking creatures take on a mermaid quality (now I understand the myth).  Quickly our small boat was surrounded by what looked to be hundreds of dark gray mermaid dog creatures, their slick water soaked bodies with big dark eyes fixated upon our every move.  Once those big eyes made contact with ours, they’d quickly dash back down in the water, never getting too close to our boat.  Others, who looked to be more on the obese lazy side, just watched from the solar heated rocks.  I wouldn’t want to leave the comforts of a warm rock to hide in the 40-50F degree water either!  I seriously didn’t know if I should have been afraid or what, so I just took cues from Jackie and Callyn who had witnessed this spectacle many times before.  They were calm, so I was calm…somewhat. 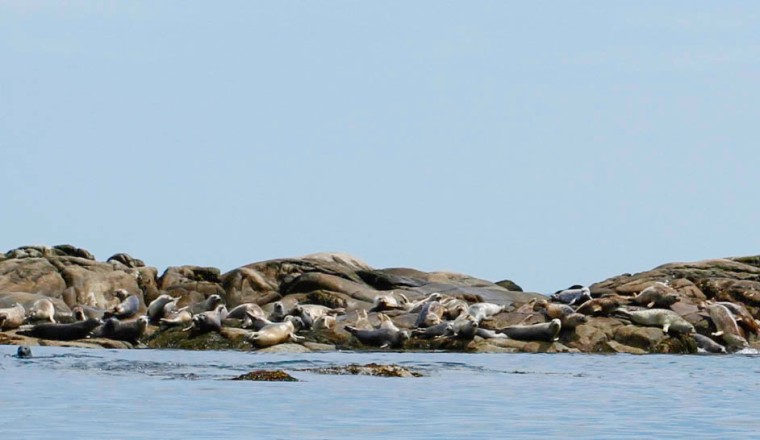 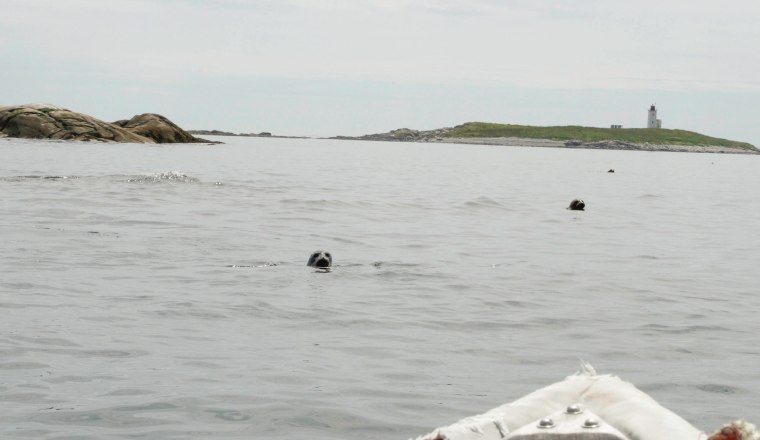 So back to the “private islands”….Who knew islands could be bought?  From what I can gather, the state of Maine sold off most of it’s outer islands in the early 1900s.  The cost was cheap by today’s prices.  Some going for $500 others for about $5000.  It all depended on the size.  Back then, they were just useless pieces of rock with trees that sat part way out from the mainland–the last bit of land before reaching the Atlantic ocean.   So families, with a little forward thought, built camps for vacation purposes.  Some with little shacks only livable during the few warm summer months and others, like our landlord’s grandfather, built elaborate log cabins that look as though you could live year round in them–though I don’t think I’d do it.  WAY TOO COLD! 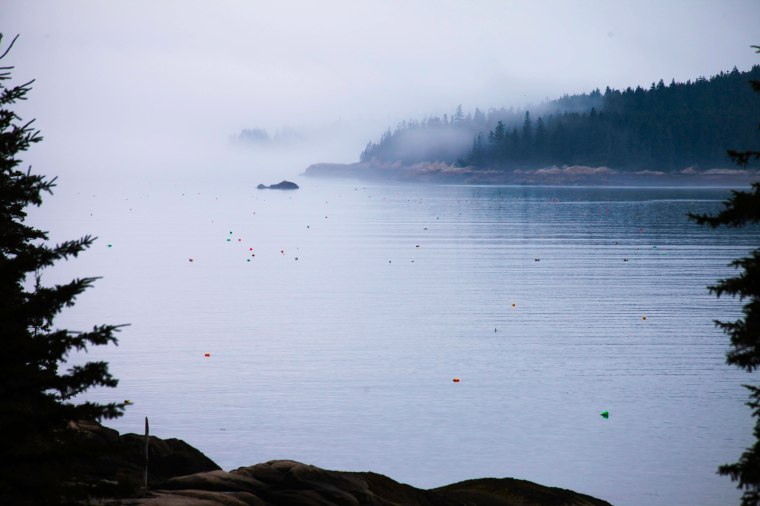 Imagine large sheets of ice floating by…it can get that cold!

So the Chef and I boarded the ferry to Vinalhaven from Rockland to see what the Maine island life was all about.  Our landlord had told us to sit on the starboard side of the ferry, and once we entered the islands, their’s was the second one.  I was expecting them to wave but oh heck no…our welcoming party went down with a bang–literally…. They fired a CANNON and rang a bell!!!  I’m sure the passengers next to us on the ferry were amazed and bewildered as much as we were.  Still–it was too cool. 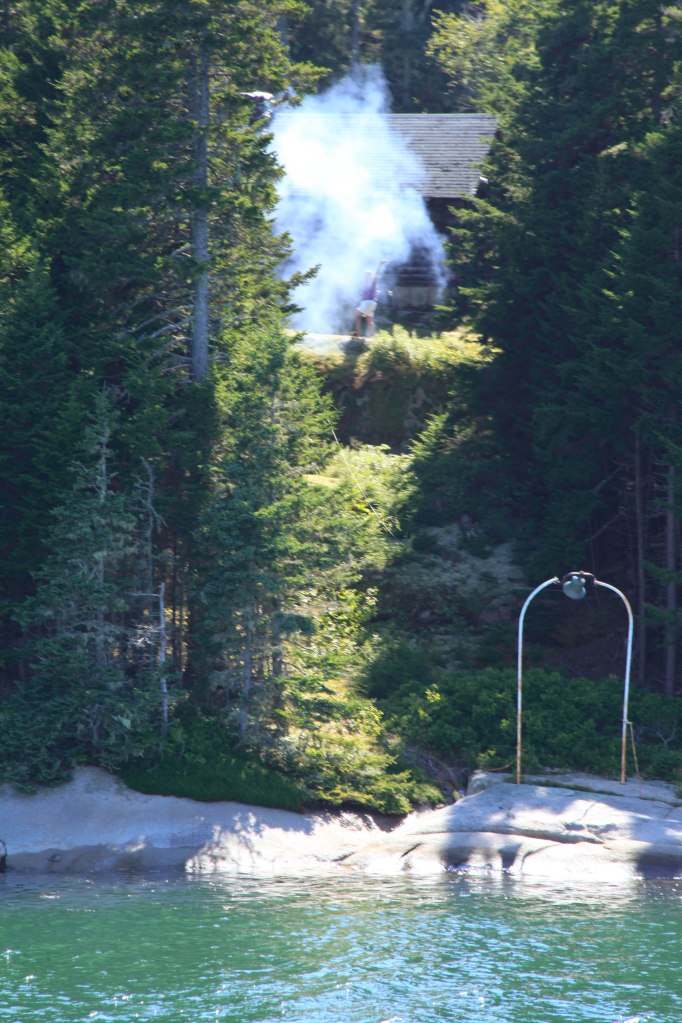 The bell is rung every time the ferry goes by to greet passengers as they make their way into the islands. It’s also a way for them to keep track of what time of day it is…island time!

Our water taxi  was waiting once we disembarked from the ferry–after a short boat ride we reached the island, happily called Treasure Island, after the 1883 book  by Robert Louis Stevenson.  The island’s shape is remarkably similar to the one in the book.   From the docks at the back of the island to where we saw the canon fire, the main cabin is not too far, but treacherous if done at night.  After our trek through  a fairy forest there in the clearing was the 1920s log cabin I had heard so much about.

Created from the trees where it stands and from pieces of the 1855 Civil War frigate, the USS Sabine, (the ship was sold in 1883 to a man from Rockland, Maine– we can only then imagine how pieces of the ship ended up in the hands of our landlord’s grandfather 37 years later and were then brought to the island.)  The log cabin is unbelievably amazing.  A true pirates mansion for sure.   It’s almost as I had imagined, possibly even better.  All hand cut and assembled…no machines to do the work here. 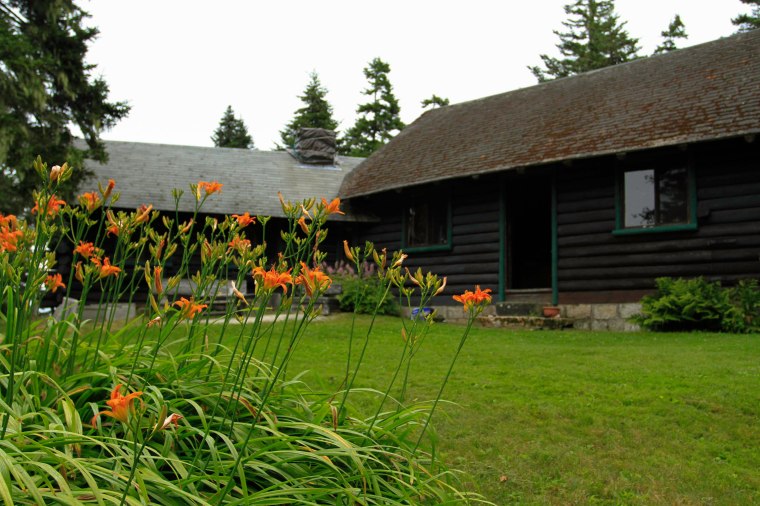 Each door in the cabin is originally from the Sabine, as is the ribbed entry way that goes from the living room into where the bathroom and bedrooms are.  Each of the three rock fireplaces have stones placed directly in the middle to symbolize the “skull and crossbones” pirate theme of the island.  The ship’s wheel light fixtures, dining tables, windows made from other boats, couches, chairs, benches..they all have a story. 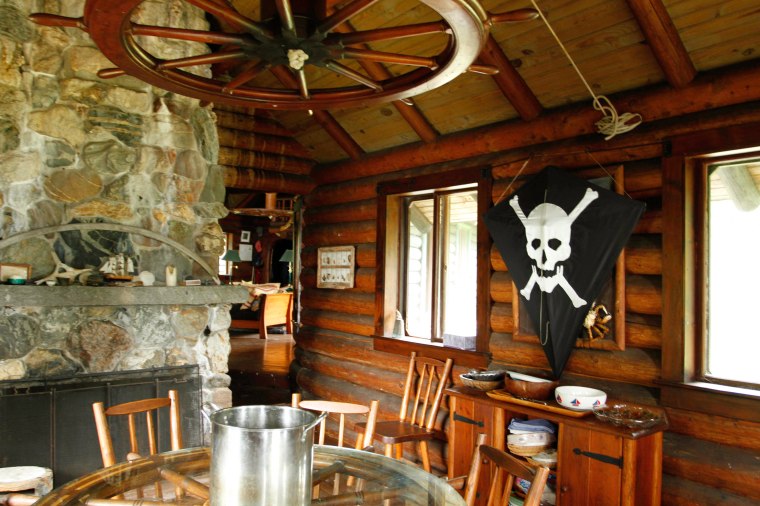 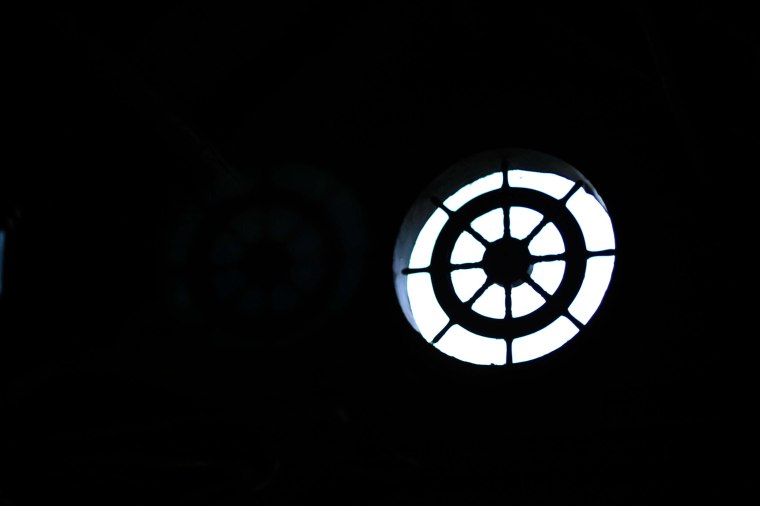 Daintria..the mistress of the island!

A walk through the woods reveals a path leading over the whales backs (two outcroppings of granite that look like the humps of two whales), a serene setting where the island’s original owners, James Winsor Baker Sr. and his wife Romain (Robin) Baker, grandparents to our landlord Daintria, are forever at rest…enjoying for all eternity their treasured island.  A place that brought them happiness and relaxation.  You couldn’t ask for a better ending. 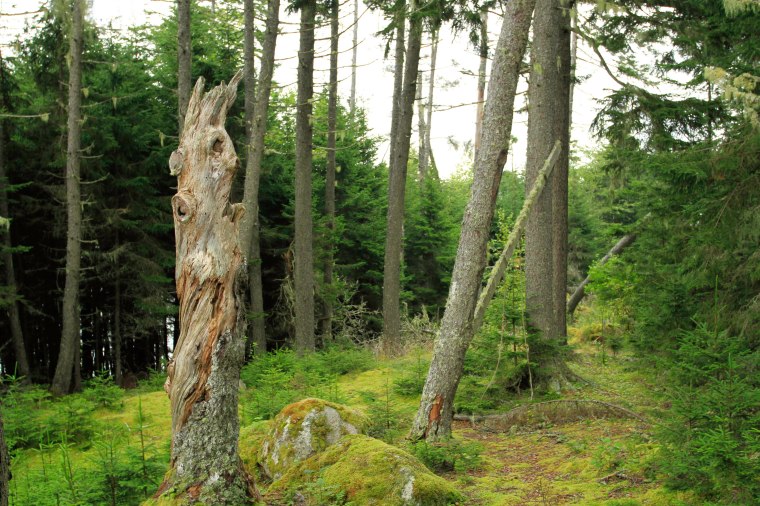 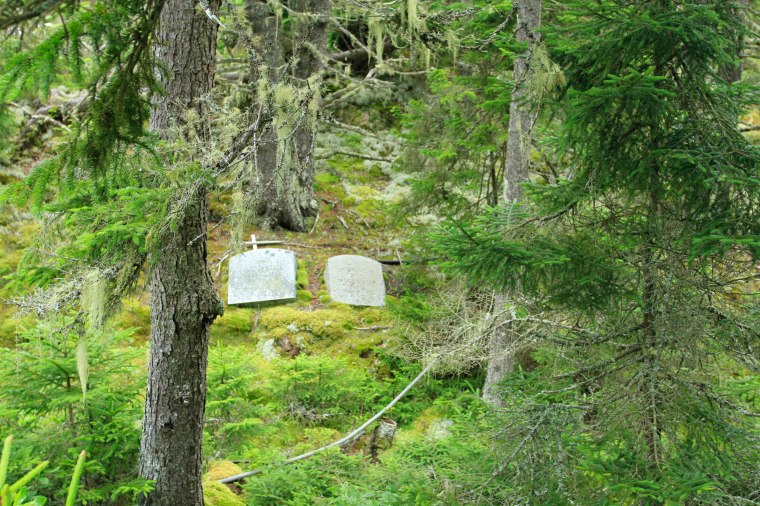 Ironically too, both either perished on the island or became sick and died later.  James Sr. died in the 60s’ after slipping off the rocks while dumping trash in the water –his body was found a few days later by the Coast Guard. In the log book for that year there’s a little ditty that reads something like this “three days later just when the party is getting into stride, Baker washes in with the tide.”   He was known to have lived life to the fullest—his grave stone says it all ” this ones on me.”  And that’s just the character of the island…a never ending party!

Successful generations have grown up coming to the island…many family memories have been made along with fascinating tales–some truly unbelievable.  The best has to be the story of the tiger who’s hide and head are draped across the landing of the staircase..  Or the elephant rib bone that adorns the mantle in the dining room.  As the story goes the tiger was shot there on the island and the elephant bone washed ashore.  So how did these creatures come to be on the island? A run aground circus steamship would do the trick.   Known in maritime history as the “Tragedy of the Royal Tar:  Maine’s 1863 Steamboat Disaster” it could very well be that a tiger swam to the island (the disaster took place east of Vinalhaven…the area where Treasure island is located), however, that would be one very old tiger…  I’m not ruling it out because I love a good story and it totally adds a little mystery to the whole island.  Isn’t that how all good stories are made though…little bit of fact…little bit of fiction?  😉

As the Chef and I made our way around the island we came to the Castine, another cabin made out of a ship!  The Castine was a Penobscot river excursion steamer built in 1889 that traveled between Rockland and Bangor, Belfast and the town of Castine.  In 1935 she sank not far from Treasure Island.  Being the resourceful man that he was, Baker Sr. had part of the hull dragged to shore and placed there on the point of the island and then made into a cabin.  Daintria said this is where the children would stay… age 6-12….with no adult supervision.  She herself remembers the nights spent in the Castine.  What fun that would have been! Yay, no parents! Let’s hang out on the rocks next to the water! Kids must have been more trustworthy back then. 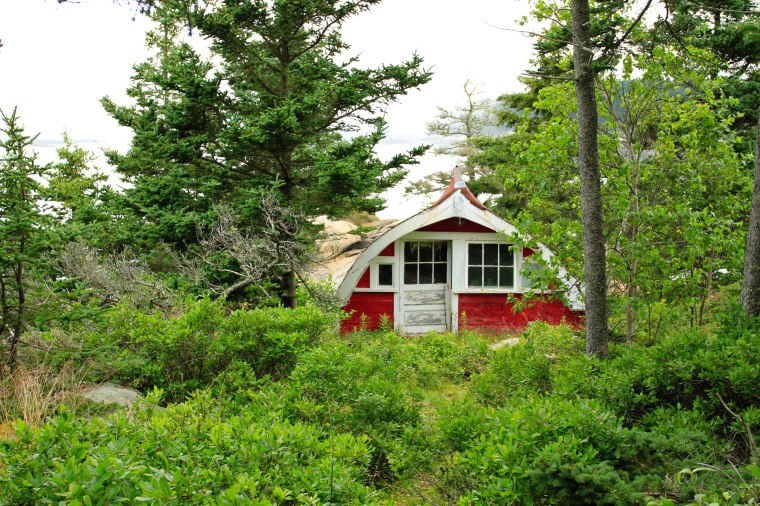 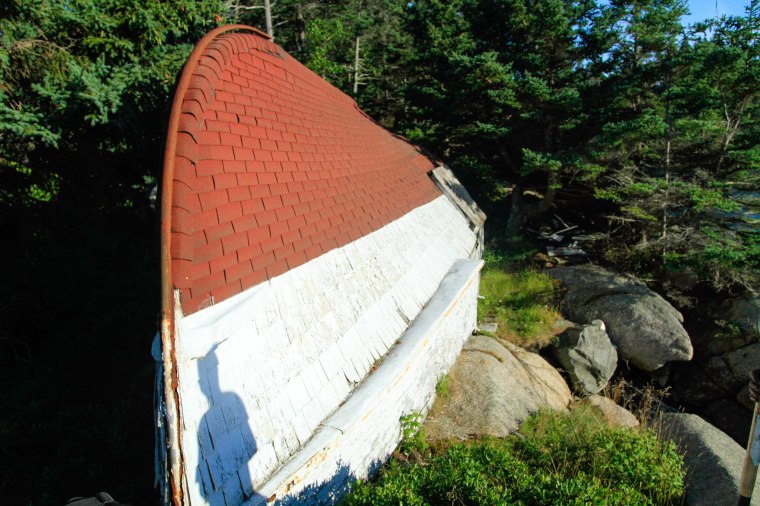 After our tour, it was time for a little clam digging.  We had to work for our dinner, no freebies on a pirate’s island 😉   I for one thought it was fun, but then again I was holding the camera while the Chef dug through the mud.  😉    We weren’t able to reach the mother-load of clams, as the tide had not receded far enough, but  at least there were a few, so that everyone had a taste.

Fireworks came after dark had descended…and not just any fireworks mind you.  In Texas they do everything big…but by far New England or I guess I should say the East, does fireworks REALLY BIG! There were no blackcat poppers or sparklers…I’m talking multiple firing rockets that give off New Years/July 4th sparkles!  INCREDIBLE!   And they are legal all year round.  That would be dangerous in Texas.  Sorry no photos were taken…I was too overcome with awe.

Our sailboat friends anchored in the cove and the people on the neighboring island were amazed at their power and beauty.  We could hear hoots and hollers coming from everywhere.  It was a great ending to a great day on the island.  After the show we went back and stuffed ourselves with clams and lobster.  All I can say….is boy what a experience! 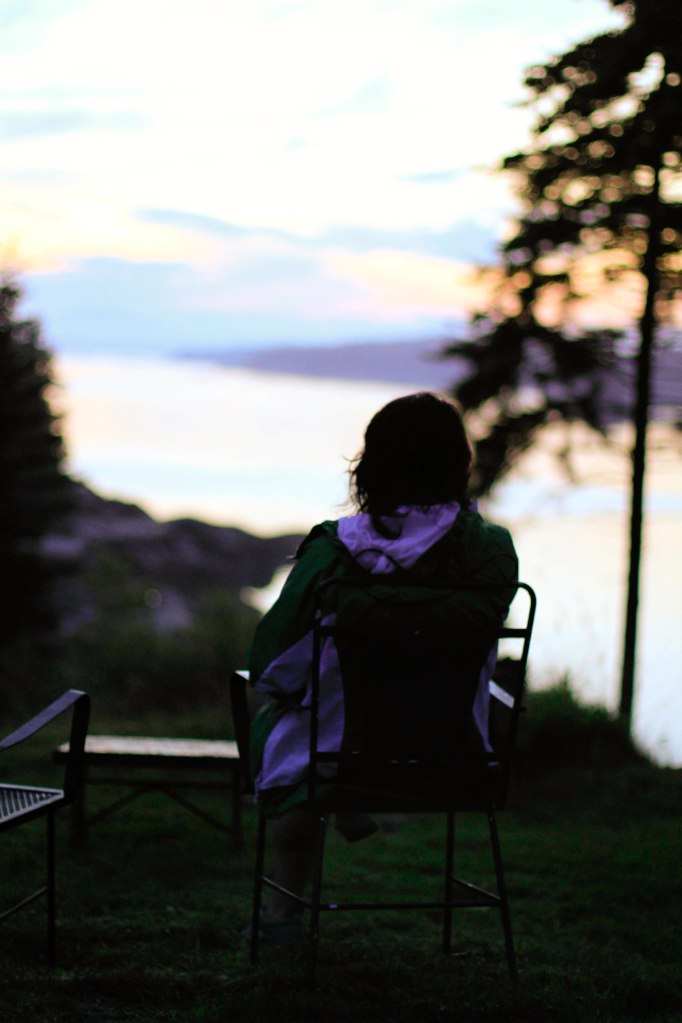 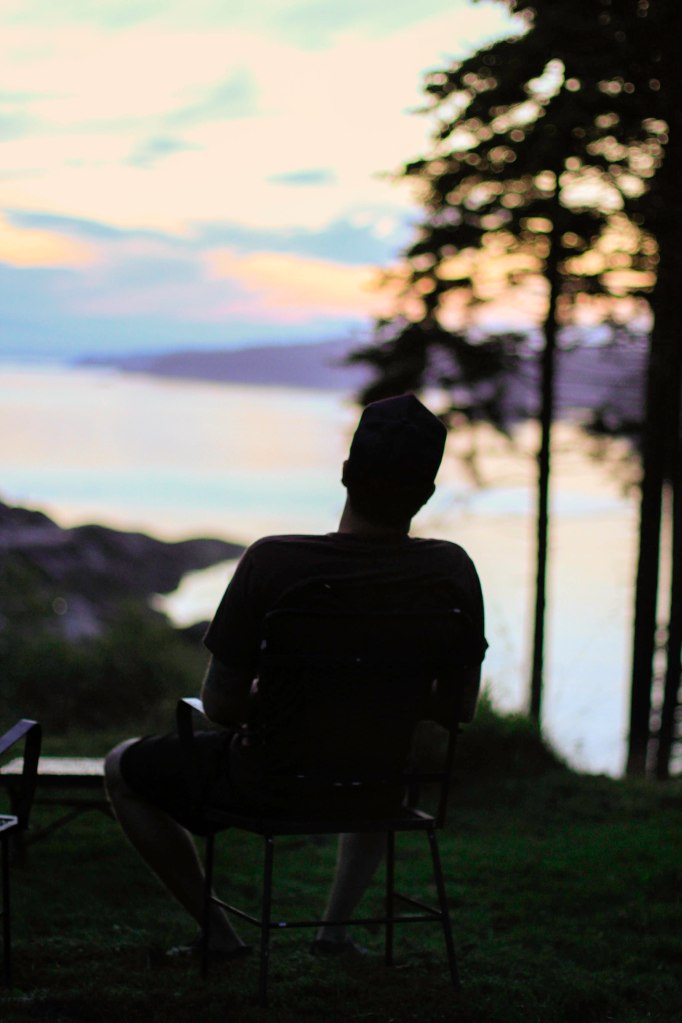 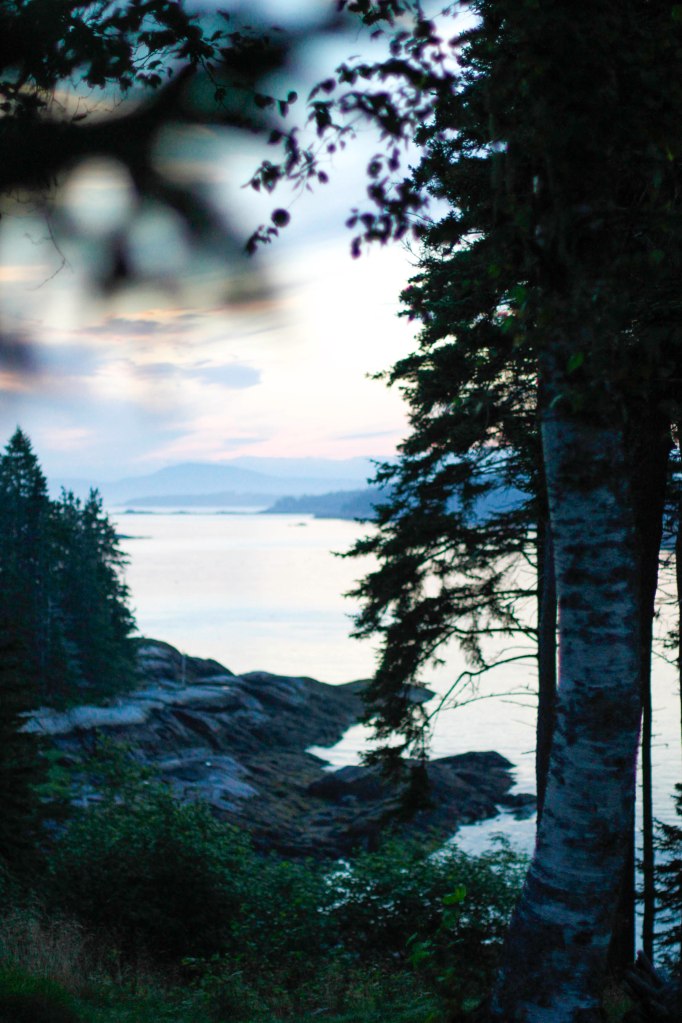 The Chef and I would like to thank Daintria, Mike, Duncan and Francis for the true Maine experience.  We will certainly “treasure” our memories of your island.  What an incredible family history….

So have you ever been to a private island?  Do share!

8 thoughts on “A Treasured Island”