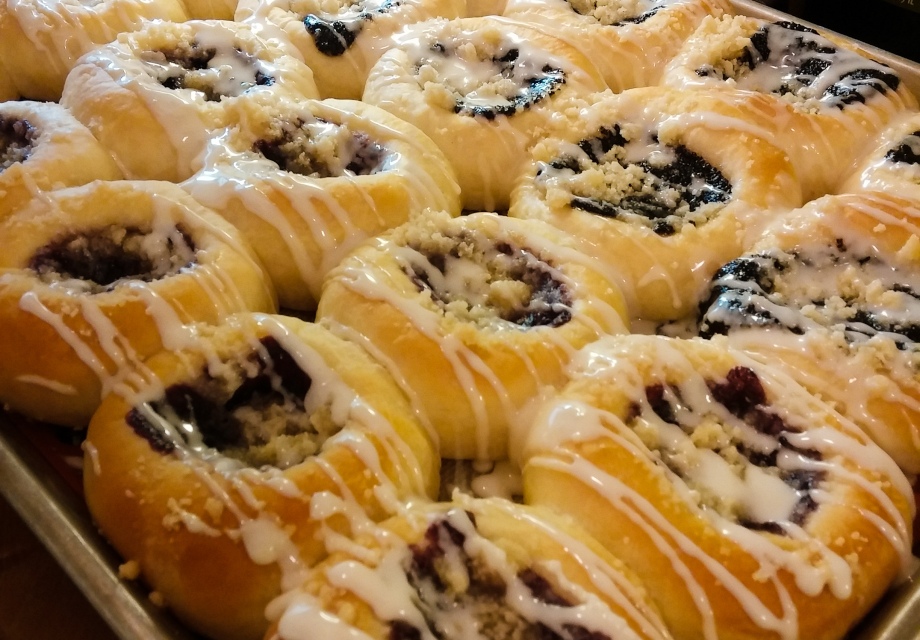 What’s the first headline of the morning that grabs my attention before I’ve even cleared the sleep from my eyes?  Something about our beloved kolache being named the “It” food of 2015.  First an article by Texas Monthly about two Texas guys here in D.C. starting a kolache place named Republic Kolache Co. and then Bon Appetit’s restaurant and drinks editor Andrew Knowlton on the Today Show stating how the 2015 trend is “healthy becomes hip”, yet the first thing he shows is a ball of bread stuffed with sausage and cheese…he calls a kolache! The true term of this savory pastry is a klobasnek, not kolache, yet everyone just calls it a sausage kolache.  My backside and I beg to differ with Mr. Knowlton on how in the heck a kolache is healthy.  But, that’s OK…I’m just thrilled to see the US has finally been exposed to the one food the Chef and I are known to shove in the faces of our many friends around the globe and US to try.  But really, what’s not to love?  A sweet dough with a sweet fruit filling…YUM!

Our Maine friends were a little skeptical over the Thanksgiving holidays when the Chef cranked out two dozen poppyseed, apple, keylime pie, and sausage kolaches.  With the first bite though, we had them hooked, at least with the sausage and keylime. The poppyseed are for experienced kolache eaters like myself.   And when in Maine, why not put a kolache spin on the traditional lobster roll?? The Chef indeed did and believe it or not…the Mainers actually liked it!  Traditional kolaches are made with fruit and covered with a butter, sugar, flour mixture called posipka, and they aren’t stuffed into a pocket like the sausage ones. 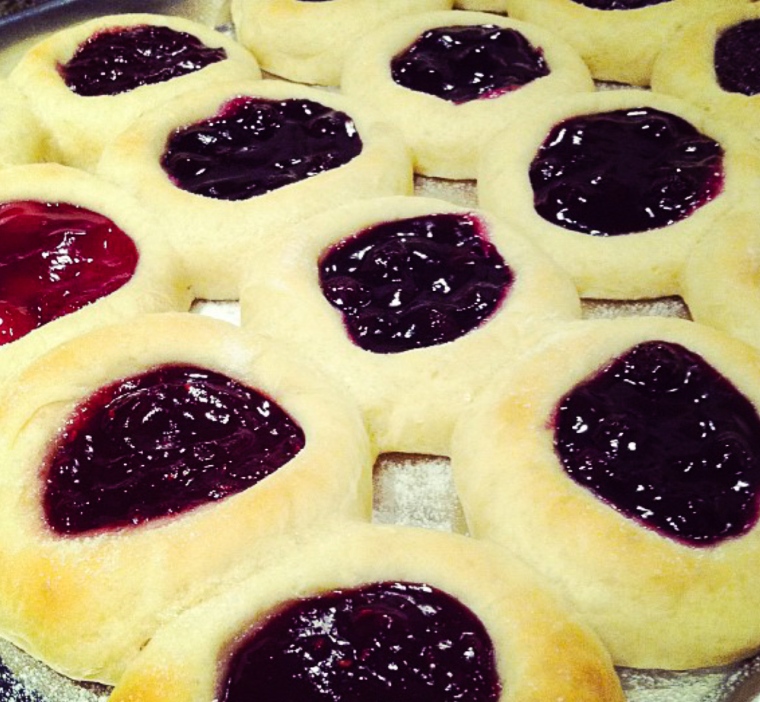 Here the Chef shows a fellow Coastie how to weigh each piece of dough, so each is the same.

My story with the kolache begins in West (comma), Texas.  The unfortunate little town known recently to the world for its fertilizer plant explosion.  Not West Texas where the tumble weeds sway.  Totally different.  West is a small Czech community situated along I-35, which connects Waco to Dallas.  In the early 1980s my parents owned a janitorial supply company in downtown West, known as WestCo.  These were the days before big box stores existed and put the little guys out of business.

Building of where my parent’s business was located  photo:  Google Images

Just a few doors down from my parent’s business was Village Bakery, known as the “First All Czech Bakery In Texas”, yet that wasn’t where we purchased our kolaches, even though it had this title.  We frequented Nors Bakery, now called Gerik’s Ole‘ Czech Bakery.  Possibly my parents knew the Nors and that’s why we shopped there, I really don’t know.  What I do know is, we rarely if ever went anywhere else in town.  My favorite was their pecan roll, which wasn’t even a roll or a kolache, but a rectangular shaped pastry filled with a brown sugar pecan mixture that was covered in a pecan glaze.  I was introduced at a young age to the poppyseed filled kolache, but didn’t like it as I do today…it’s obviously an acquired taste.  My mother’s favorite was the traditional prune kolache.  I couldn’t stand the taste then or now.  Sorry Mom.  Most of those who stop in West for kolaches only get as far as Czech Stop because of it’s highly visible and easily accessible spot right off I-35.  On occasion we would stop in for sodas and such, but never for the kolaches.  All residents of West have their go to spot for kolaches, if they aren’t baking them in their own kitchens.  For instance, my babysitter of many years, a sweet Czech woman, only frequented the Village Bakery.

And..the Chef, well…he’s a Czech boy! He’s been eating kolaches since he was in his Momma’s womb! Ha.. that’s weird.  When I asked him about his first memory of eating a kolache, he jokingly said his mom used them in lieu of a pacifier.  Apparently there was never a moment kolache dough wasn’t in the house…from dinner rolls, to tea rings, to kolaches!  His mother’s heavily guarded recipe was given to her by her mother, who in turn received it from her sister-in-law, who learned it from her mother… a Czechoslovakia immigrant straight off the boat!  That’s her in the photo… circa 1952, long after she and her husband left Czechoslovakia.

Everything about a kolache depends on the dough…the dough can make or break it.  It took me nearly five years of marriage (ten years total of being with the Chef) before I was ever able to “see” the recipe!!  In the early 2000s when the Chef and his Momma owned Holly Road Cafe in Corpus Christi, Texas; kolaches were a staple in their pastry counter.  Even though they sold out everyday and were requested by the dozen, the time of kolache just had not yet dawned, at least in South Texas.  Looking back now, they were way ahead of their time…like fifteen years ahead according to Bon Appetit!

So after the headlines it got me thinking…we’ve never done a post about kolaches.  The one food that occurs quite frequently in our home, my parent’s home, and the Chef’s Momma’s home.  The real “It” food of our background that’s been with both of us since we were wee little ones! How could we let such a thing slide?  I’m sorry to report though…no recipe or directions will be shared.  It’s a family secret!  However, a quick Google search and one can be baking within minutes…the key though is how you work the dough and that comes from either being born into it or taking the time to perfect the skill.  So, here’s to the year of the kolache…  a food “star” that’s always been in our families!

Easter 2011..Chef and his Momma working up dough

And once again this past Christmas…Chef and his Momma christening her new kitchen with kolaches!

Have you tried the kolache?  If so, what’s your favorite?  If not, you must seek them out…you won’t be disappointed!