Today’s date is rather fitting for the following tale…

seriously restrooms in the Metro, there's no need to lie...

I’m not exactly sure how it happened or even why, but somehow this summer I became weirdly obsessed with the Paris Metro.  Quite possibly it was that anxious feeling I got when the approaching train was just a few minutes out.   As I stood on the platform and gazed into the tunnel I wondered what awaited within the darkness…duh a train. 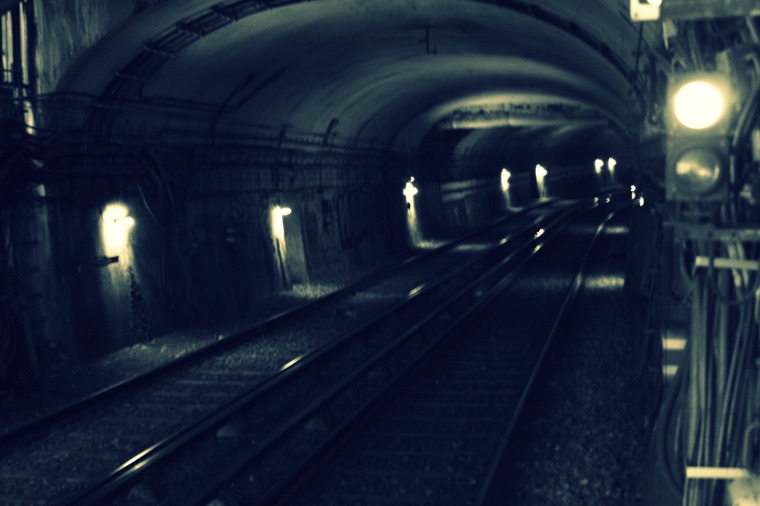 Then again, anxious may not be the best word to describe my feeling.  Sometimes I had a surge of adrenaline, like something exciting was about to happen (silly, yes). 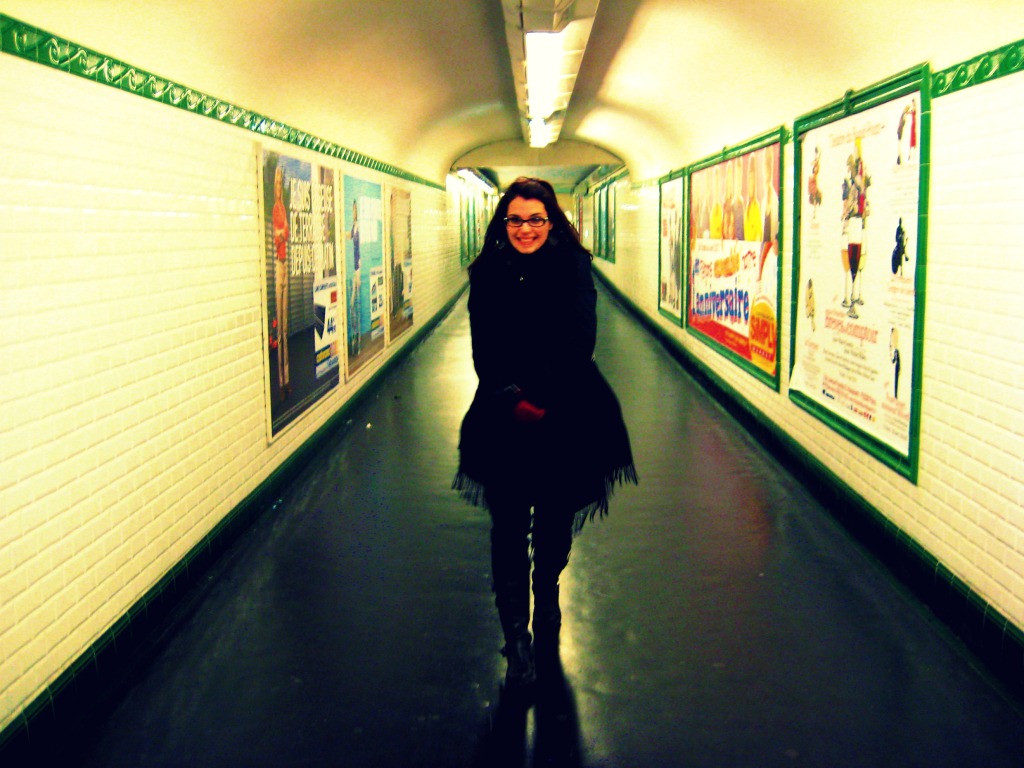 i know...it's weird to be this excited in the metro

Maybe it was that odd smell, sweet and metallic (probably just pee combined with industrial odors) along with the tornadic wind within the station’s corridors that got me excited.   I even began to think of the rolling stock (the train) as giant metal worms, that inched their way through the dark undergrounds of Paris.  I know how silly that all sounds…but my imagination couldn’t help it.  I mean come on…the Metro is over a 100 years old…it’s got a soul and heartbeat all its own.

You know there’s some history lying forgotten along those tracks! As I starred into the abyss of darkness I couldn’t help but think–what lies beyond the platform?  Ooh…so mysterious…

holding back the urge to pee my pants...here comes the giant electrified metal worm

So naturally, the inquisitive history nerd side of me took hold and I frantically began researching the history of the Paris Metro.  To my surprise I learned there were at least 6 stations that were either closed during WWII (thanks to the Nazis occupiers) or never opened due to other reasons set forth by RATP (Régie Autonome des Transports Parisiens).  I also discovered a whole culture of urban explorers who traverse the undergrounds of cities such as Paris in search of the unknown.  Blogs such as SleepCity and Pridian.Net have extensive photos and stories of the Paris Metro.  I’ve literally spent hours on my very own virtual tour of the Paris Metro through their blogs alone.  They’re some crazy, adventure addicted dudes and dudettes! 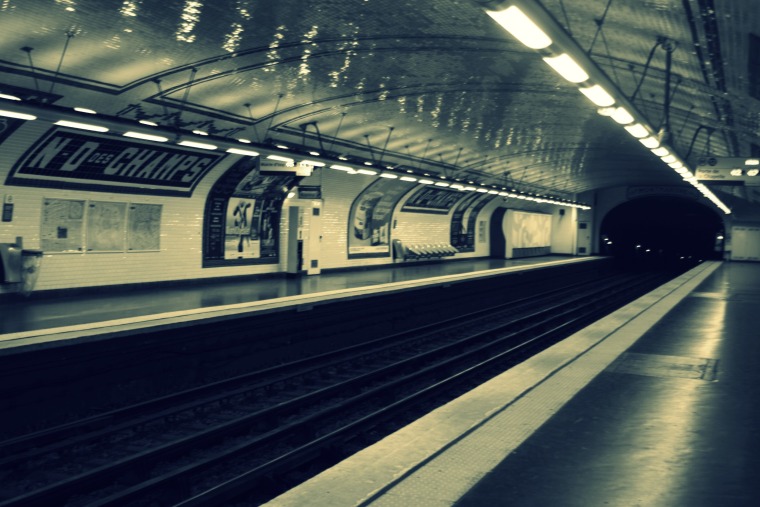 So with a Paris Metro map in hand and the Chef in tow, it was time I caught a glimpse of the phantom stations of the Paris Metro. As law abiding citizens in a foreign country we weren’t about to risk being literally “locked up abroad”; so the Chef and I decided not to go the traditional urban explorer route of scurrying down manholes, inching past security cameras and dogs, dodging oncoming rolling stock while trying to avoid electric death by the third rail…no we opted for the sissy way…the back window of the conductor’s car. It was there we could see *somewhat* the illusive stations of Paris’ past.  Though I have to admit, there’s a part of me (princess not invited) that would absolutely LOVE to try the urban explorer way! 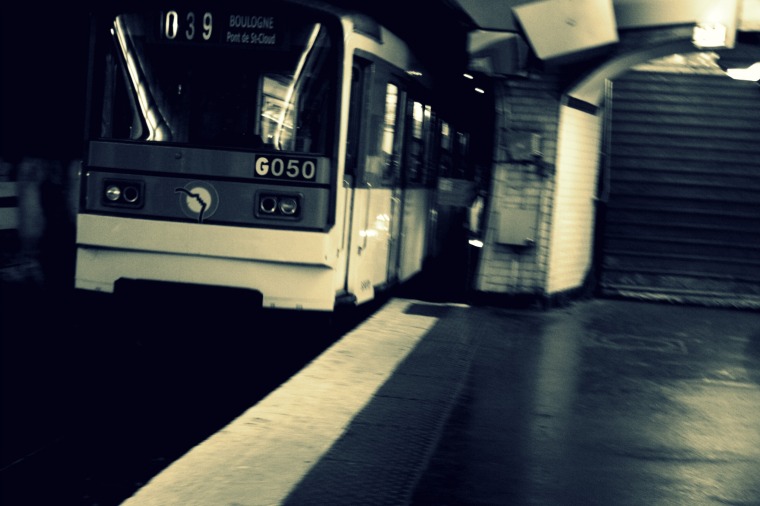 Our first phantom metro station was on line 10, Croix Rouge, named not for the Red Cross organization, but because of the cross streets that lie above ground.  It was opened in 1923 and closed for good on September 2, 1939 because of World War II and was never reopened because it was to close in distance to the station  Sèvres – Babylone. 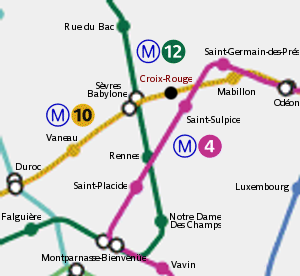 Now, one might think–what is there to see?  Really, the answer is, not much.  You pass by so freaking fast it all just kind of blurs together.  The only way you know you’ve approached the phantom station is that the outer wall gives way a little, you see a platform, heavy graffiti and some dusk covered chairs.  That was about it.  Being the weirdo I am, I was actually thrilled by this, like I had witnessed the unearthing of the Holy Grail or something.  My Chef, well I can’t say he was in awe like me.  He just looked at me and shook his head.  Once we arrived at the next stop, we jumped off and immediately crossed the platform to ride again in hopes to catch a better glimpse.  We did this about 6 times, before the Chef gave me the look like–you’ve had enough, this isn’t some carnival ride.

The next phantom station to chase down… Champ de Mars, located on line 8 which was opened in 1913 very near the Eiffel Tower, but was also closed on the same day as Croix Rouge in 1939.  Again, we boarded the last metro car, peered out the window…but this time saw nothing!!!  After 4 trips up and down the line, in between where this station was supposed to be located we saw nothing.  I’ve never been more distraught.  That’s when the Chef had seriously had enough and put a stop to my nonsense.  The photo below gives clues as to why we didn’t see it.  It’s missing the identifiable metro platform seating and one platform has a wall built on to it…no wonder!

And really–those were just the so-so phantom stations.

One in particular, St. Martin which is situated on lines 8 & 9.   From what I’ve read and see in photos it is spectacular!  It closed like the others on September 2, 1939 and reopened for some time after the war, but eventually closed again due to it’s proximity to other stations.

St. Martin is supposed to be in pristine condition–meaning all 1940s advertisements are free of graffiti…as though time is standing still.  What’s the reason for it’s protection? It is not accessible from the top and extremely difficult to get into.

The only successful sightings are either done by the professional urban explorers, such as the ones I’ve listed above or by the “in the know” metro junkies through the historical society Ademas, which give tours of the phantom stations…Yes tours!  Instead of dragging my poor uninterested husband through a day of phantom chasing in the metro we could have had the full meal deal–a nice stroll (with Paris Metro history experts) in the footsteps of Parisians of the pre-World War II era without security and death by third rail nipping at our heels! If only we would’ve had more time. 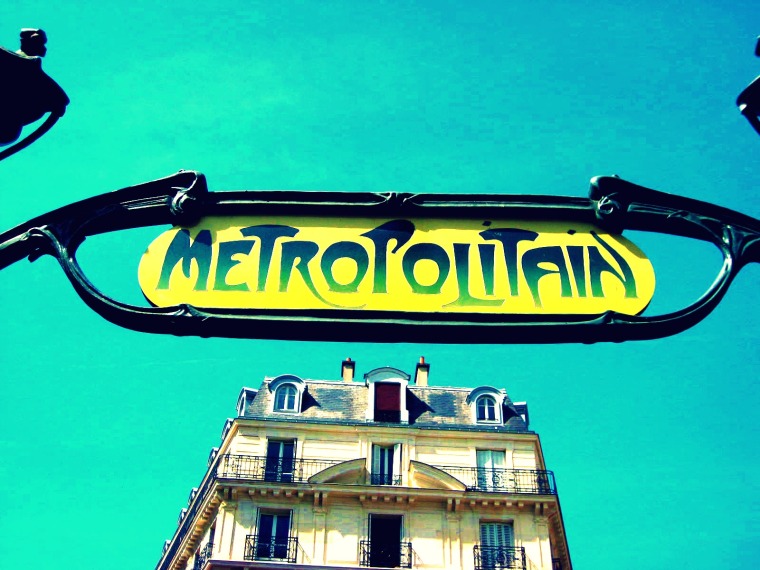 Thus concludes the tale of my strangely odd, weird and nutty obsession with the  phantoms of the Paris Metro.  There’s always something I get terribly fascinated by and won’t give in until I’ve seen and done it; this being one of them.  It does make for an interesting life and my husband can’t complain.  He’s been on more wild goose chases than anyone he  or I know!  Until my next weird infatuation…

8 thoughts on “Chasing Phantoms of the Paris Metro”