Yesterday, while we were out and about we decided to head over to the East side of Galveston in hopes that  Mosquito Cafe’s next door bakery was finally open (it’s been months since we ventured that way).  Sure enough, it was!  It’s called Patty Cakes Bakery and it’s adorable!  Matt’s mother (Patty) would have a fit, considering she’s a baker too and loves Mosquito Cafe and their baked goods!

The smell of butter and sugar starts here!

Immediately upon opening the door of your car (yes the aroma coming from the building is that intense) you’re hit with the heavenly smell of butter, sugar and bread!  My heart seriously skipped a beat.  Once inside your senses are on overload.

There’s a counter full of pastries, cakes, cookies and tarts.  Baked bread and other goodies line the back wall.  It took us literally 10 minutes to figure out what we wanted because all the choices looked so amazingly tasty!

A little girl of about 3 years old was going gaga over all the pretty cupcakes and pink heart-shaped sugar cookies–tugging on her mother’s arm and saying “I want this one mommy, and this, and this”….. I think she ended up getting one of everything.  Lucky little princess!

How can you resist these precious swans? 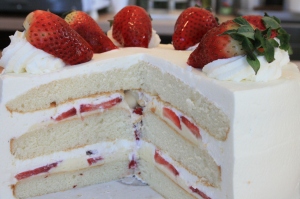 I'll have the rest thank you! 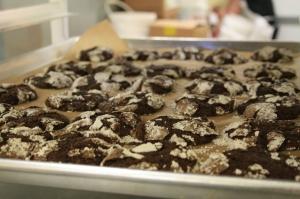 cinnamon twists right out of the oven

So what did we decide on?  Matt was hoping to find his favorite lemon cake, but I think they were out, so he opted for the coconut cake.

he nibbled on it before taking the photo

Since I can never pass up a cupcake, I decided on the European Vanilla cupcake (yes I know my infatuation with anything European-couldn’t resist).  I’m glad I did because it was filled with Bavarian cream (an added bonus).  The little bundle of goodness was so enticing, I ate it before Matt could take a picture…oops!

So if you are on the East end of Galveston and in need of a sugar fix–you know where to go.  They even have treats for your 4 legged buddies!

Bring Fido home something sweet too!